Many thanks to those who participated in the live announcement last night. We’ve got plenty of work to do. However, if you missed the announcement then here is the video and a transcript of my full remarks.

Since August 24, 1996, I have dedicated my life to seeing Texas live up to the promise of the opening words of the Texas Constitution.

Article 1 Section 1 of the Texas Constitution begins with the words, “Texas is a free and independent state…” I view it as a core foundational principle of our republic. It is both inspirational and aspirational. It is a promise to our generation and the generations that come after us. It is what we are supposed to be. It is non-negotiable.

But ask yourself this question: “Do you feel that Texas is free and independent?”

As Texans, we are at a crossroads, a decision point in history. Much like the line in the sand that Colonel Travis drew at the Alamo, we are being presented with a choice.

On one side of the line is a Texas that is being fundamentally transformed and becomes weaker by the day as the federal government seeks to destabilize Texas and exert unconstitutional authority over the lives of our citizens while Austin politicians exhibit a level of weakness rooted in incompetence or disloyalty to Texas.

On the other side of the line is one of the most momentous decisions that we could ever make. It’s an opportunity for the people of Texas to reclaim our fundamental right of self-government, purge the weak, tinpot tyrants and political opportunists from Austin and break the back of the political establishment for good.

Year after year, Texans have been treated to campaign rhetoric from establishment politicians that condemns a system that taxes us out of our homes. We’ve been promised relief yet every year Texans are crushed under the weight of ever-rising property taxes and many are driven from their homes because they are unable to pay the ransom to a government that spends like a drunken sailor. For the last several legislative sessions, the current Lieutenant Governor has boldly declared that the Legislature has delivered meaningful property tax relief. The promised relief amounts to little more than crumbs from the master’s table.

Look at what’s happening on our southern border. For nearly two decades the border and immigration have been the number one concern for Texas voters. This fact has not escaped our current Lieutenant Governor who campaigns on solving the border crisis every election cycle to win votes but takes half-measures that never really solve the problem. While Texans suffer, both in the border counties and beyond, the reality is that the Lieutenant Governor and other politicians have exchanged bold and meaningful action on the border for carefully scripted photo-ops in patrol boats and helicopters. Today the border crisis is worse than it has ever been with Texas becoming the number one state for human and sex trafficking in the United States and the cartels effectively in control of the border.

For too long, the Lieutenant Governor has stood by and allowed the federal government to call the shots in Texas. When he campaigns, he talks tough about fighting back against federal encroachments on the sovereign rights of Texas and the personal freedoms of Texans. His actions tell an altogether different story. He stood silently in agreement beside Governor Abbott as the authority and power of the Texas Legislature was usurped and Texans were grouped into “essential” and “non-essential”. He didn’t utter a word of complaint while businesses were unconstitutionally closed and Texans were prohibited from attending religious services. When Abbott declared that he was merely following orders from Dr. Fauci, the CDC, and the federal government, the current Lieutenant Governor didn’t utter a syllable of protest.

As the federal government has facilitated the criminal activities on the southern border, his actions have amounted to little more than incessant interviews on Fox News, blaming the federal government and raising the white flag of surrender to their actions. His weakness has made Texas a target of contempt, even leading some who looked to us for hope to suggest that we no longer deserved our reputation as the bastion of freedom and independence. For him and the political establishment in Austin, the phrase “Come And Take It” has become our surrender terms to Washington bureaucrats instead of the statement of defiance it was meant to be.

When thousands upon thousands of Texans descended on legislators this year to demand a vote on TEXIT, as guaranteed under Article 1 Section 2 of the Texas Constitution, the Lieutenant Governor turned a deaf ear to their pleas and joined the chorus that treated his constituents with contempt and derision. TEXIT supporters were dismissed, mischaracterized, vilified, and denied a voice in how they are governed.

This history of mismanagement and campaign conservatism extends to all areas that touch the lives of Texans. We should not have to beg our elected leadership to fix the power grid, or restore parents as the primary stakeholders in their children’s education. We should never have to pressure our representatives to protect our history and monuments as lawless mobs topple memorials to our sacred dead and destroy our culture. We shouldn’t tolerate officials who are elected under the banner of their political party but completely ignore that party’s platform and priorities.

And we should never, ever re-elect an officeholder that will not put Texas first, no matter the cost.

What the Lieutenant Governor and others in the permanent political class do not understand is that Texans are tired of gestures in the form of tersely worded resolutions and lawsuits. They are tired of seeing time wasted on mustaches and mermaids while being told there is no time to address their legitimate cares and concerns. Texans will no longer tolerate it when the little Neros of Austin fiddle while their lives and livelihoods are upended or destroyed. Texans are through with politicians who govern like Californians and Washington bureaucrats and then, like a character out of central casting, don their cowboy boots and hats, and dust off their old prop pickup trucks to campaign like they are one of us.

Beginning months ago, I have been approached at every speaking event with people asking me to run for political office. This culminated in an open letter submitted to me by dozens of grassroots leaders and organizations encouraging me to do the same.

After much prayer and discussion with my wife, my family, friends, other political leaders and elected officials in Texas, political activists, grassroots organizations, and my second family in the Texas Nationalist Movement. I have made my decision.

It is for all of these reasons and more that tonight I am officially announcing that I will be running as a Republican candidate to become the next Lieutenant Governor of the great State of Texas.

I am not running because I ever wanted to run for statewide office. Those who know me, know that this was never in my plans. I am running because I must. I must honor my commitment that I made 25 years ago and I must answer the call of thousands of Texans who have asked me to do so.

For years our current Lieutenant Governor has promised to address the issues. Instead, we have been treated to fiery interviews full of excuses and rhetoric without results. The people of Texas have been subjected to claims of victory that have been nothing more than hollow and meaningless gestures meant to temporarily placate voters until the next election.

Angry social media posts, interviews, and tersely worded letters are no substitute for wielding the power of the office of Lieutenant Governor to stand up to tyranny, federal overreach, and the ever-growing cancer of neo-Marxist dogma.

This is a once-in-a-generation opportunity to take Texas back for the people and to break the back of a political establishment that holds nothing but contempt for the people they purport to represent.

No more asking. No more begging. No more playing defense. No more hand-wringing or what-ifs. No more excuses for compromise or capitulation.

Today we take the fight to them.

Article 1 Section 2 of the Texas Constitution states that “All political power is inherent in the people..” It’s time to show the political establishment how powerful we can be. For me, that battle leads to the Office of the Lieutenant Governor.

As your Lieutenant Governor, together we can:

I will stand as a bulwark against encroachments on liberty and against the insider politics of the Texas Legislature. As President of the Senate, I will ensure that business is conducted transparently and end the backroom deals that leave the people of Texas out of the discussion. I will give a voice to the people of Texas in determining their political future and reasserting the independence of Texas. I will unapologetically stand for life, liberty, prosperity, and property and never back down on our right to be a self-governing independent nation.

I will be your voice, your hands, and your champion.

I know that the political establishment will throw everything they have to stop us. They will call us vile names. Lies and half-truths will be their allies. So what? We will not be canceled. We are unafraid. Nothing worthwhile was ever easy. With work, perseverance, and the confidence that we are right in our cause, we will overcome and we will prevail.

I believe that this is an existential crisis for Texas. The next 100 years of Texas history are going to be determined in the next several months. How will Texas be remembered? How will you be remembered?

We begin this campaign with a half-million supporters already onboard and growing daily. So I call on them and every other Texan who cherishes those first words in the Texas Constitution, to join our movement to take Texas back and to stand up for Texas.

I encourage everyone to visit my website at danielomiller.com and enter this fight alongside us.

As we enter this new, historic chapter of our fight to win Texas, I’m reminded of the words of Sam Houston as he addressed the Texian Army before the Battle of San Jacinto.

“We view ourselves on the eve of battle. We are nerved for the contest, and must conquer or perish. It is vain to look for present aid: none is at hand. We must now act or abandon all hope! Rally to the standard, and be no longer the scoff of mercenary tongues! Be men, be free men, that your children may bless their father’s name.” 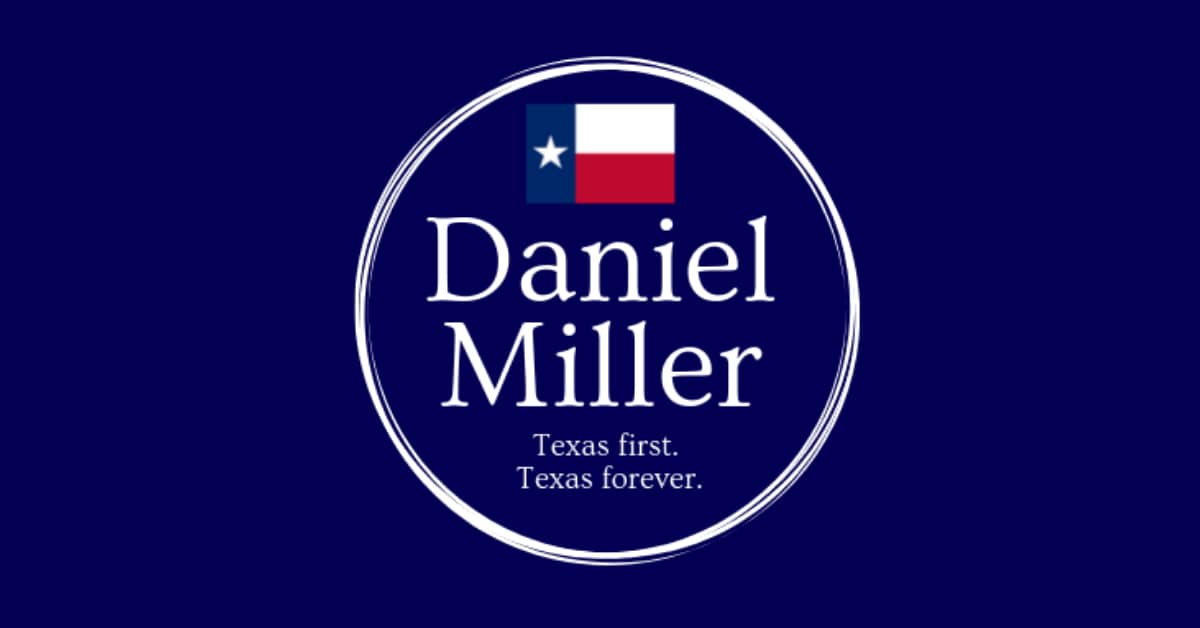