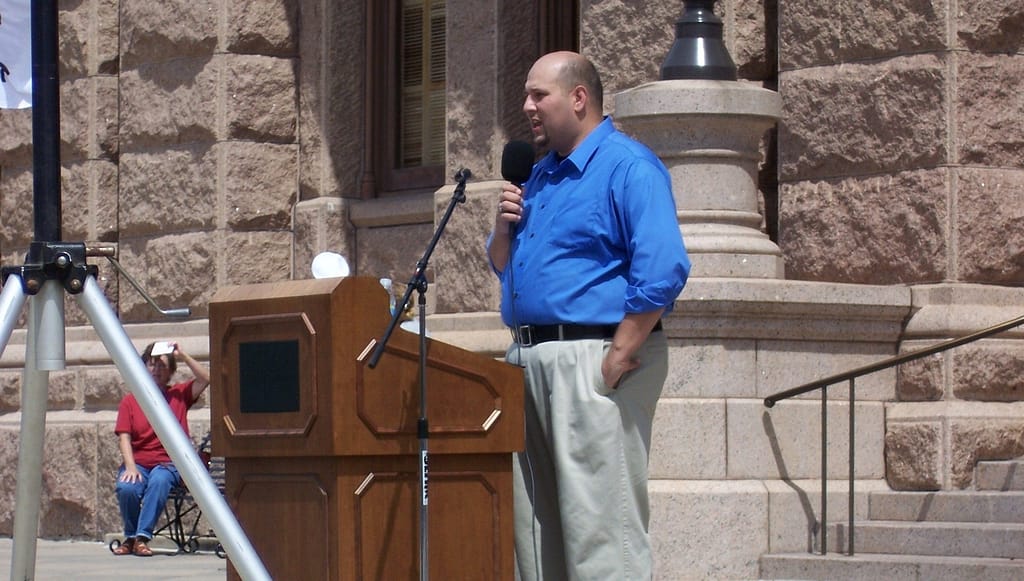 Governor Perry didn’t show up at last week’s “Secession or Sovereignty” rally at the state capitol—no elected officials appeared at all, in fact—though his recent widely noted reference to secession was in the air. All Texans have thought about leaving the union at some point in their lives, Daniel Miller told me a few days after the rally, even if they won’t admit it. Miller, who heads the Texas Nationalist Movement, was one of the rally’s keynote speakers. “Texans have a cultural history that screams independence,” he said. “Everybody in Texas—even if they were joking about it—has said at one point, ‘We could break off and be our own country again.’”

Originally appeared in the September 2009 issue of Texas Monthly.

Miller, who is 36 years old and has male-pattern baldness and a neatly trimmed goatee, has been a secessionist for thirteen years. He is self-employed—he runs a popular Internet radio site with his wife—which leaves him plenty of time for politics. The Texas Nationalist Movement is more or less an offshoot of the old Republic of Texas movement, though Miller has taken pains to separate himself from the public perception of the ROT, which took a bad turn when Richard McLaren, a spokesman of sorts, wound up in prison after a hostage standoff in Fort Davis in the mid-1990s. Miller shuns violence. “We tell all our people that the only solution is a political one,” he said.

The Texas Nationalist Movement is avowedly non-partisan and Miller bristles at being labeled “right-wing.” His father was a union steelworker and lifelong Democrat; the hold music on Miller’s personal phone line is “The Revolution Starts Now,” by Steve Earle, a well-known leftist. Miller acknowledged that Perry’s comments—which came at a “tea party” event in Austin in April and which boosted the governor’s poll numbers considerably—had given his group a shot in the arm as well, though he personally is not a fan of the governor. Perry wouldn’t even have mentioned secession at all, Miller said, if he and a few dozen others hadn’t been in the tea party crowd chanting the word at the time. So the governor owes him one.

Miller, who begins each day with a three-hour “news cruise” on the Web, is well read. In our forty-five minute conversation he cited John Naisbitt (author of Megatrends: Ten New Directions Transforming Our Lives), Igor Panarin (maverick Russian political scientist), Thomas Jefferson, and Sam Houston, who, despite opposing Texas’s first secession movement, has given latter day secessionists a heck of a lot of good quotes. (“Texas has yet to learn submission to any oppression, come from what source it may”; “Texas will again lift its head and stand among the nations,” etc.) This is not the 1860s, however, and there is no reason to think that the next secession will end in civil war, Miller said. “Thirty-five new countries have been born in the past decade,” he said. “Everybody in this country stood by and applauded when Lithuania and all the other states left the Soviet Union,” he said. “What they need to be doing is applauding us now.”

The prospect of leaving the union raises a lot of questions. Is secession legal? Will the Longhorns still be in the Big 12? Who will deliver the mail? After thirteen years, Miller has heard them all. “You can ‘What if’ this thing to death,” he said. The temptation to find a new one was irresistible, however. What would prevent the various sections of Texas, I asked, from breaking off from the new country after recession? What if, for example, the citizens of the Lower Rio Grande River Valley decided to rejoin Mexico? Miller said he had heard that one before, but he had a hard time envisioning it. A really hard time. “I think the odds of that happening are up there with winning the lottery,” he said. “Or being slammed into by an asteroid.”