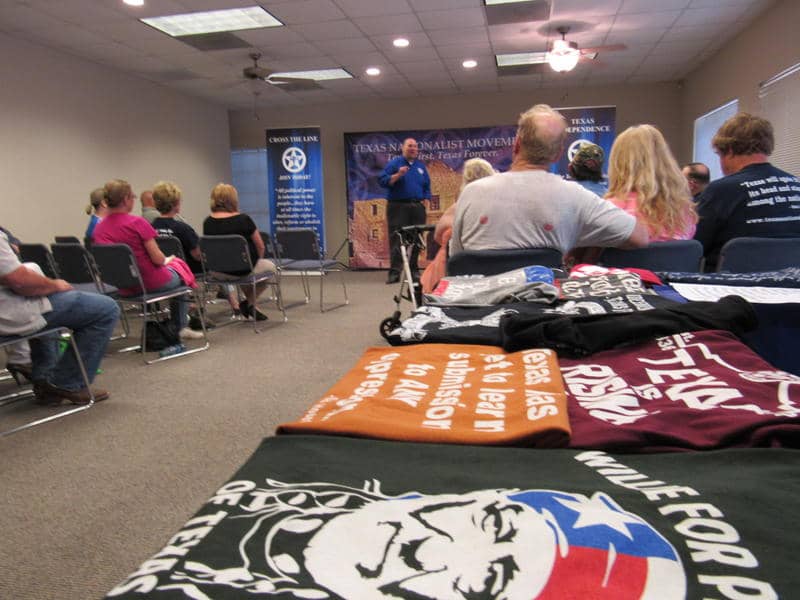 Texas has seceded twice in its history. The attempt during the Civil War didn’t go well but one could say breaking away from Mexico did. And there are those who would like to try secession again from the United States. The Texas Nationalist Movement says they are building momentum and voters could soon have their say about Texas independence.

This article originally appeared on Texas Public Radio. You can read and listen to the full interview at this link: https://www.tpr.org/post/texas-nationalist-movement-wants-issue-tx-gop-ballot

On a recent Saturday afternoon about 20 people have gathered at the Center for Life on San Antonio’s north side. Their demographics are generally white and older. They don’t look like a band of rebels looking to overthrow the U.S. government, but that’s why Richard Reinhard and other here are.

Reinhard expresses a common complaint these days that national politics has gotten off track.

“I consider the government we have right now to be socialist. The Republican Party has relented as far as I’m concerned. I’ve been Republican all my life. This Democratic Party we have now is not democrat. I don’t even consider them American to tell you the truth, that’s just my opinion,” he said.

Linda Lang says she is also dissatisfied with where the nation is heading and she’s willing to support Texas independence as a way to express her frustration.

“They say it probably can never happen. But I want a voice and I want Texas to maybe set a good example that we aren’t going to sit back and take everything dished out by Washington D.C. They’re taking away out rights – our religious rights,” she said.

Lang came to hear a plan that could once again make Texas an independent nation.

“Take Texas back from fear, doubt and hopelessness to share the message with the people of Texas that the power is in their hands, that Texas would be better off as an independent nation but more than that should be,” said Daniel Miller, president of the Texas Nationalist Movement to the room of people.

In front of the room, pacing in front of a wall sized photograph of the Alamo Miller delivers his speech that explains the dream.

“We want a free fair and binding vote on Texas independence. And that’s why we’re doing this. Because we’re tired of the elected officials no longer being leaders,” he said to the group.

With the confidence and bravado of a skilled salesman Miller makes his pitch. He’s selling a vision and he first needs to make the listeners believe that the dream can be made real. And that he has a viable plan to make it real. Step one of that plan is to get the question of secession in front of voters.

“We are collecting 75 thousand signatures to place the issue of Texas Independence as a non-binding referendum on the Republican Party primary ballot in 2016,” he said in an interview.

If the question “The State of Texas should reassert its status as an independent nation – for or against” gets on the March first ballot and if it passes, that won’t bring back the Republic of Texas. But if it passes Miller said, then they have the ammunition to demand action from state leaders.

“For example having Governor Abbott call a special session to address this topic,” he said.

Miller says the legislature could take up independence and would put the issue binding issue on the ballot and Texas would have a referendum like Scotland had last year.

The Texas Secretary of State’s office, which oversees elections in the state, says Miller is correct. He can put this issue on the GOP ballot if he gets that required number of signatures. And the Republican Party of Texas would have no say in the matters.

A state GOP official who was unwilling to be recorded says that makes them uneasy because this is uncharted territory.

But the interesting question is how would state leaders react? Miller says he might have an alley in the governor’s mansion.

“You can only look to the term that Greg Abbott had as attorney general and see how many times he was in court fighting the Federal Government on certain issues,” he said.

And Miller said Abbott’s signing of the new state law creating a Texas Gold Depository is a significant step towards preparing for secession.

“We were active on that bill from the moment it first saw the light of day in 2010. We’ve been advocating not just for repatriating the gold that Texas owns back here but to incorporate that into a state bank system that can be utilized as a federal reserve once independence is achieved,” he said.

In the signing statement for HB 483 Abbott did not acknowledge the Texas Nationalist Movement or mention anything concerning a long term plan for Texas Independence.

Nevertheless, Miller says the passage and the signing of the Texas Gold Depository law was a victory for the Texas Nationalist Movement and it’s a victory that he plan to build on.

Join Us For A Special Pre-Early Voting LIVESTREAM